As of the current AWS API, setting the Expires and Cache Control headers for all objects in an AWS S3 bucket requires a script. It is possible to do it one file at a time through the AWS control panel, but that is tedious if not impossible for buckets with lots of files.

I was hoping the AWS CloudFront ‘edit cache behavior’ screen would be a way of getting around this. There is a CloudFront distribution option for overriding an origin’s cache settings. For whatever reason, this did not work. I tried creating a totally new distribution, editing an old one, waiting overnight, nothing made a difference. Maybe it is fixed by now and worth another try? 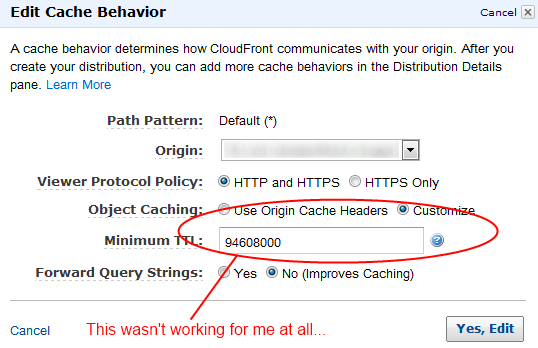 With the ‘edit cache behavior’ being a dead end, I whipped up a script to explicitly set the headers at the S3 source on a per file basis.

It turns out using the AWS PHP SDK, there is a trick to getting this done. It involves using the copy_object method with the metadataDirective set to REPLACE. Not as clear of an API as it could be, but it got the job done. Hopefully this saves a few readers some frustration.

Setting the expires and cache-control header is a good idea if you want client browsers to  cache your content. It saves on bandwidth and makes your site run faster (especially in concert with CloudFront).  3 years out seemed like a good number to me.

There are two headers to set.  Expires is from the HTTP 1.0 standard, while Cache-Control was introduced in the HTTP 1.1 standard. Depending on what kind of client is connecting, a different standard might be used.  I’d think HTTP 1.1 would be the more popular choice given it came out in 1999!

Signup for my free newsletter
Expect to hear from me 0-2 times per month on software news, my latest writings, coding tips, and a tech joke or two.
I hate spam as much as you do. Unsubscribe at any time.
This entry was posted in Code, Sys Admin and tagged aws, command line, scripting. Bookmark the permalink.