Today’s topic is success as software professionals.  Many important lessons on this subject can be found in an unlikely place – Colin Powell’s auto-biography “My American Journey”, published in 1995.  Hey, what does this have to do with software you might ask? As I keep saying, success in a technical discipline like software increasingly hinges on communication and leadership ability.  My American Journey is a manual for success. 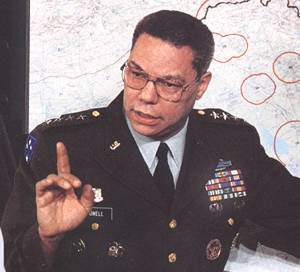 My first observation is how Colin Powell (a C student in high school) found himself in a huge organization that he could flourish in and would eventually lead.  This happened to be the military at the height of the cold war. More on the cold war later…

Powell sets out career themes which he reinforced, rather ‘drilled’ throughout the book. He kept sayings on his desk to remind him of things he learned the hard way. Some of these are quoted below:

In any presentation Powell would take care to manage his words, posture, and body movements. These are techniques he learned at officer training school. In the civilian world we have Toast Masters.

At press conferences he would do his best to give the answer he wanted to hear, vs. answering the question put to him.

“Never let them see you sweat.”

“Perpetual optimism is a force multiplier.”

This is real. The startup I was part of in 2002 had this going for it. I have helped it manifest again and again in my career. It is a joyous feeling to begin each day on the job surrounded by the force multiplier.

Sometimes, we get crappy assignments. Here is how to deal with it:

“If you get the dirty end of the stick, sharpen it and turn it into a useful tool.”

Okay, back to the cold war… When Powell became the Chairman of the Joint Chiefs of Staff, he saw Russia collapsing and the cold war coming to an end. This made much of the US mililtary strategy obsolete as the 1980’s drew to a close. Powell saw the magnitude of this earlier than most.  Instead of holding onto the past, he pushed for a 25% reduction in the size of the military. This was in spite of the fact he personally loved the military and knew how damaging the cuts would be to service men and women entrusted to his care.  The rules had changed.  He was in a position to do something about it. Understanding the reoccurring dynamic of change, as illogical and random as it often can be, is a key to success.

Software becomes obsolete and that can take people with it. Here’s a trick for staying ahead of change that Powell learned from a lawyer during a round of downsizing:

So what does a career in software look like?

There is no 30 year career map for a programmer like there is for a 4 star general. It is more like a steep ramp from Jr. to Senior in 5-7 years that involves a 3-4x pay boost.  Then what? Architect, principal engineer, CTO, freelancer, teacher, entrepreneur, author, consultant?   The answer is Tabula rasa – a blank slate.

So how does a software professional flourish? Today nobody cares if you did DOS 5.0 programming.  In fact they may feel sorry for you.  However, if you lead a team of diverse individuals to succeed on a project that made money, it is absolutely relevant and always will be.  The software professional of the future is not a coder, but a communicator and leader who understands the business and the code.  Coding is a commodity. Understanding how to apply the commodity to get the outcome is where the action is. It does not hurt to genuinely enjoy the challenge of working with customers.

Final quote from Powell, especially when it comes to your life – “Have a vision. Be demanding.”

A complete list of his rules can be found here:

Signup for my free newsletter
Expect to hear from me 0-2 times per month on software news, my latest writings, coding tips, and a tech joke or two.
I hate spam as much as you do. Unsubscribe at any time.
This entry was posted in Book Reviews, For New Developers, Work and tagged career, leadership. Bookmark the permalink.